I Syed Sha Mohammed Jamalullah Basha, proud to be inherited Khazi (Islamic Magistrate) of Kadapa District, Andhra Pradesh, India. This Khazi system is running in my family since 1843 for which I have proof of records and documents.

I wish to explain a brief history of my ancestors who holds the post of Khazi for Kadapa District for the past two centuries and still continued by me with all responsibility.

My father, Syed Sha Mohammed Kamalullah Basha held the post of District Sir Khazi, appointed by the Home Department of Andhra Pradesh state, in succession to my grandfather. Upon that my father maintained marriage records in Kadapa taluk’s and town. After his demise I am continuing the same and covered the remote villages of Kadapa district by appointing hereditary Islamic scholar’s as Naib to Khazi (second in command appointed by Sir Khazi to perform the duties in his absence) in every place to protect and maintain the records safely, and to perform religious duties under my guidance.

As a Sir khazi for local area comprising Kadapa mandal including Kadapa town, my duty is not only to performing Islamic marriages but also to announce the festival dates of Ramadan fasting start date, Edi-ul-Fitr, Eid-ul-Adha, Eid Milad-un-Nabi and Muharram etc., along with festival announcement according to Islamic Calendars. My forefathers performed these duties in a systematic way. I am much thankful to the Govt. of Andhra Pradesh for appointing me to the post of Khazi for kadapa district after the demise of my father, so that I can continue the noble work and safe guard the records available with me. This has helped in protecting the records as well as stopping the unauthorized persons in solemnizing the Islamic marriages which could have created unnecessary confusion and problems in the Muslim community in Kadapa District.

Education & Family: In My family the eldest son always stood as Islamic high scholar from past hundreds of year and I am also thankful to Almighty Allah (Subhanahu ta’la) and inform it with pride and proof that my family belongs to direct decedent of Prophet Muhammed (peace be upon him).

In my family all are well verses of Mystism, Sufi philosophy and my family tree has a well-known sufi past for the last 1000 years, Some of the well-known names are: Hazrath Ahmed Kabeer Rafai (R.A) decendent to Hazrath Ghouse-ul-Azam Dastagir (R.A) and his decendent family in India is Hazrath Jalauddin Jahania-e-Jahan Gast (R.A.)

About me, I possess a double M.A., in Urdu literature, I am also an Arabic Scholar from Latifia Arabic college (Course duration 9 years) and Qari from Baqiyath Arabic College both of North Arcot Vellore district of Tamilnadu.

I am well versed in Islamic Theology and know religious Laws and was well trained by my father, I know Arabic, Urdu, Persian, Telugu, Tamil & English languages. I got experience in the khazi’s duties responsibilities and functions under the guidance of my late khazi father since from 1989.

The names mention below are my ancestors and khazi’s of kadapa district who rendered their service to the Muslim community of the district from the year 1843 AD. 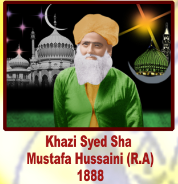 Govt. khazi for kadapa Dist, from the year 25-12-1925 to till death 1938 (continued as Khazi from the date of demise of Khazi Mustafa hussain saheb till to his date of demise) 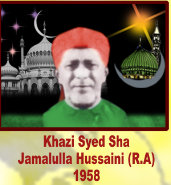 As per the records and Magazine documentary proof available with us, it clearly shows that khazi-ship in our family tree is continuing for more than 400 years to till date without any interruption.